Pierre Beccu made four films released in theaters and twenty documentaries. For 20 years, at the same time, he has been working on mediation with young people. "Seeds of Hope" is in line with his film "Peering into our plates", produced with students, and released in theaters in September 2015. 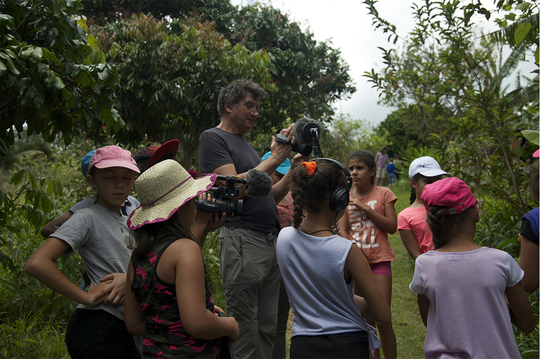 Pierre Beccu and the children of Petite Ile in Reunion

In 2015 he founded the association 6labs, which managed with the support of the Fondation de France nearly 600 events and debates around “Regards sur nos assiettes”. The 6labs association is responsible for raising awareness and training young people from the 8 territories so that they are able to tell their stories themselves.

Bas Canal Productions & 6labs bring a cinematographic, theoretical and practical know-how, which will then remain on each territory, like a planted seed. The 6 labs (practical theory laboratories) are: perceive, feel, think, communicate, create, share. They complete a cycle in which the child is put back at the heart of an individual and collective creative process. In doing so, he (re) becomes an actor in his life and also in a co-constructed future. The working method of 6labs makes it possible to achieve an uninhibited awareness that frees speech and the will to register as an author of the present and future world.